The Patron Saint of Mariners 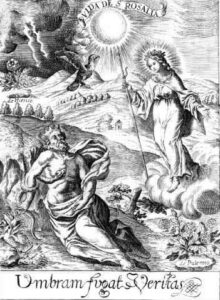 St. Rosalia was born around 1132, daughter to Count Sinibaldo and Mary Guiscard, a descendant of Charlemagne. She had a privileged life and had many would-be suitors. At sixteen, she rejected the life she was born into and retreated to a cave near Palermo, Sicily. She consecrated her life to Jesus Christ and lived as a hermit. She inscribed on the cave wall, “I, Rosalia, daughter of Sinibald, Lord of Roses and Quisquina, have taken the resolution to live in this cave for the love of my Lord, Jesus Christ.”

Rosalia died in the cave. She became the patroness of Palermo, Italy, after a hunter discovered her bones on July 15, 1625. Later that year, an epidemic of the plague struck Palermo. Rosalia’s relics were carried in a procession through the town, causing an immediate end to the scourge.

In 1668, an account was published in Madrid, witnessing the rescue at sea of Marcisco Morillo, the owner of a large ship returning from Palermo with a cargo of wine. As the ship neared Monte Pellegrino outside of Palermo, Morillo asked the crew and passengers to recite an Our Father and an Ave María to St. Rosalia.

Shortly after they sailed out of Palermo, Morilo encountered a fierce storm, and everyone on board feared for their lives. The waves became ever more furious, the night was dark, and there was no possibility of help from the shore to save his crew. Morillo took from his pocket a small relic of St. Rosalia and asked everyone to join him in prayer. With tears in their eyes, they all pleaded to St. Rosalia for deliverance. Out of nowhere, a small boat appeared and took them from their distressed vessel and to the safety of the shore.

They gave thanks to God and Saint Rosalia in a mass that Morilo quickly organized. Since that time, it is common for sailors to pray to St. Rosalia during a storm or when there is a fear of attack by pirates. A large marble statue of the saint, which could be seen many miles away, was later erected on Pellegrino facing the sea. She became a brilliant, noble, and celestial beacon.

Charles III, King of Naples, became King of Spain in 1759 after his half-brother, Ferdinand VI, had died. He donated a statue of St. Rosalia to the people of Palermo. It was only during his reign that ships were named Santa Rosalia. He died on September 13, 1788. Every year in Palermo, she is venerated for three days, July 13 to 15.

There are churches in the U.S and around the world where these festivals are usually held in July.

Saint Rosalia’s feast day is September 4. In another act of deliverance at sea, the Spanish galleon, La Galga, was blown off course with six other treasure ships destined for Spain. La Galga was in constant danger of foundering, her sides were held together with twisted ropes when she ran on to a reef or shoal miles from Assateague Island and began pounding the top of the shoal. The crew were convinced they were going to die. Miraculously, La Galga slipped into deeper water and prepared to run ashore on Assateague. It was September 4, 1750.

The next day, the ship drove into shallow water close to the beach with her decks awash. Everyone made it safely ashore. Legend, as well as a preponderance of the evidence, suggests that the wild horses that roam Assateague today came from La Galga.

My fate has been tied to this shipwreck. It was in March of 1978, while researching shipwrecks at the National Archives in Washington, D.C., that I by chance pulled one volume out of over seventy of the Maryland Archives Series that contained an index reference to a wrecked ship. That ship was La Galga and her captain, Don Daniel Huony, gave explicit directions on how to find La Galga. After a survey it was determined to be within two ship lengths north of the Maryland/Virginia boundary. But that line had been the subject of debate since 1668 when it was first surveyed but in error. The line was not redrawn until 1883.

Many people have searched for this shipwreck because of the apparent ease to find her. I was one of them. My search began in April of 1980. My partner and I rendezvoused in Chincoteague Island, VA to set up our 22 foot Aquasport center console with plans to search the ocean the following weekend.

When I returned home to Washington, I found a note on my desk with a cutout of an ad from the Wall Street Journal advertising for investors for a treasure hunt at Ocean City, Maryland. The note said “Looks like you’re too late!

But I wasn’t at all. Not known until later, a con man named Donald Stewart, had set up a treasure hunting company called Subaqueous Exploration and Archaeology. Ltd. (SEA, Ltd.). I was determined to beat him to La Galga. In the end, I quit my job and went to work for SEA, Ltd. By, November of 1980, SEA, Ltd. had not located La Galga. On a return trip to Washington, Stewart asked me to research five shipwrecks said to be lost on the Delmarva Coast. The Cornelia, the Three Brothers, the Adeline, the Faithful Steward, and the “Santa Rosalea.” I knew these wrecks came from Robert Marx’s book, Shipwrecks of the Western Hemisphere.

I went to the Library of Congress and looked for the book, Naval Records of the American Revolution which I had consulted many times before. But I turned into the wrong alcove by mistake. Before me was the book, Index, Papers of the Continental Congress 1774-1789. Reminiscent of my discovery of the Captain Huony’s letter two years before at the National Archives, I pulled it off and consulted the listings for the “Santa Rosalea.” Stewart had said it wrecked in 1788. What I found was a list of treasure aboard the Santa Rosalia in 1785. It was written in Spanish and I attempted a translation, “By the eight who have just arrived…..” 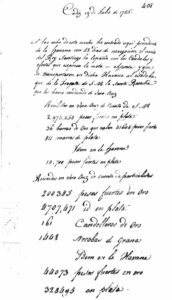 This, in fact, said, “At eight o’clock tonight she arrived from….” It sounded like an account of shipwreck to me. Stewart ran with that mistake and led SEA, Ltd. to file a fraudulent claim of discovery in federal court to the Santa Rosalea he said sank off of Ocean City, Maryland, in 1785. There were other false claims and fraudulent shipwrecks, but it was the Santa Rosalia which led me to discover his frauds and intervene in the federal court action.

News of this intervention reached the newspapers and was read by Peter Hess, a young admiralty attorney in Delaware. Peter got in touch with me because he was getting involved in some shipwreck claims in Delaware’s Federal District Court. One of the ships claimed by Indian River Recovery Co. (IRRC) was the “Santa Rosea Lea.” I knew Stewart was behind this one.

IRRC’s claims were booted out of court and Peter Hess went on to a successful career as an admiralty attorney. He became the lawyer for Sea Hunt, Inc. and at the insistance of his client, filed an  unsupportable claim to discovery of La Galga resulting in the ship being awarded to Spain by the 4th Circuit Court of Appeals. That alleged discovery and award I later proved to be unfounded.

There were other “coincidences” with Saint Rosalia in my 1750 adventure. Some are documented in The Hidden Galleon. My personal belief is that Saint Rosalia saved La Galga centuries ago from certain destruction. She also has shown herself to be involved in my present mission to see La Galga excavated and placed in a museum. If she did save La Galga, then she saved the horses which would never have swam ashore the many miles from that destructive sand bar. 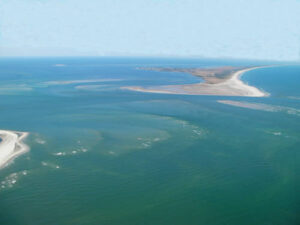 Ocracoke Inlet. In 1750 the treasure of the Spanish galleon was stolen and buried on Treasure Island

The fate of the other ships of the fleet were also tied to that of La Galga. 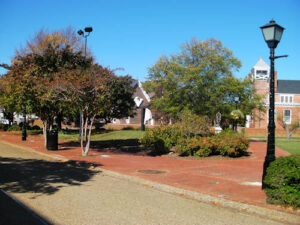 Owen Lloyd’s home was at this spot in Hampton, Virginia in 1750

The fleet’s departure from Havana had been held up by La Galga. Of great significance, is the Nuestra Señora de Guadalupe which entered Ocracoke Inlet, North Carolina losaded with treasure. Her treasure was then stolen by two brothers from Hampton Roads; Owen Lloyd and his one-legged brother, John. This event would inspire Robert Louis Stevenson to write Treasure Island,

In recognition of Saint Rosalia, I named by 36 ft Sabre motorboat after her. We will be making ports of call at all of the locations involved in the 1750 events: Snow Hill, MD; Chincoteague, VA; Hampton, VA; Norfolk, VA; Suffolk, VA; Ocracoke, NC; Edenton, NC; New Bern, NC; Cape Lookout, NC; Wilmington, NC  and Elizabeth City, NC, and all of the fun places along the way.